[C]apital punishment today is 'reasonably well adapted to the purposes that it serves, but deterrent crime control and retributive justice are not prominent among them.'

Instead, the death penalty promotes 'gratifications,' of 'professional and political users, of the mass media, and of its public audience.' ... [C]apital punishment derives 'its emotional power, its popular interest, and its perennial appeal' from five types of 'death penalty discourse.' They are: (1) political exploitation of the gap between the Furman decision and popular opinion; (2) adversarial legal proceedings featuring cultural tensions between capital punishment and liberal humanism; (3) the political association of capital punishment with larger political and cultural issues, such as civil rights, states’ rights, and crime control; (4) demands for revenge; and (5) the emotional power of imagining killing and death. ... '[T]he American death penalty has been transformed from a penal instrument that puts persons to death to a peculiar institution that puts death into discourse for political and cultural purposes.' 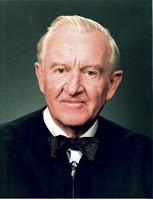 -- Retired U.S. Supreme Court Justice John Paul Stevens (right, credit), summarizing and quoting the conclusions drawn by New York University Professor David Garland in his just-published book, Peculiar Institution: America’s Death Penalty in an Age of Abolition.
In the same review, Stevens restated his own conclusion, which he had announced in his opinion in Baze v. Rees (2008), that

the death penalty represents 'the pointless and needless extinction of life with only marginal contributions to any discernible social or public purposes.'