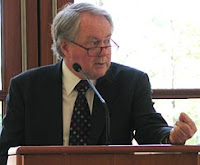 By comparison to those modern post-World War II constitutions, ours is an old-fashioned Constitution, a creature of the eighteenth century Enlightenment. Several years ago, Secretary of Defense Rumsfeld disdainfully referred to 'old Europe.' If he had been speaking of human rights, he should have referred to the 'new Europe' and the 'old United States.'

-- Judge William A. Fletcher (above), U.S. Court of Appeals for the Ninth Circuit, in "International Human Rights and the Role of the United States," just published in the Northwestern University Law Review. The article, which idenitifes the United States as an exceptionalist in its approach to human rights, follows another article that Fletcher published a few years ago, in the University of Virginia Law Review. (photo credit) Both were based on lectures given at the respective universities.
by Diane Marie Amann at 5:30 AM