Take a tally. Look at what I promised during the campaign. There’s not a single thing that I’ve said that I would do that I have not either done or tried to do. And if I haven’t gotten it done yet, I’m still trying to do it. 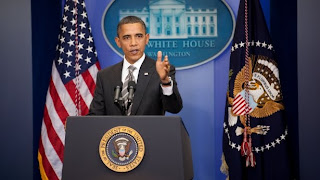 And so the -- to my Democratic friends, what I’d suggest is, let’s make sure that we understand this is a long game. This is not a short game. And to my Republican friends, I would suggest -- I think this is a good agreement, because I know that they’re swallowing some things that they don’t like as well, and I’m looking forward to seeing them on the field of competition over the next two years.

-- President Barack Obama (prior posts), today, at the middle of his term in office. Full transcript and video here.
by Diane Marie Amann at 9:28 PM