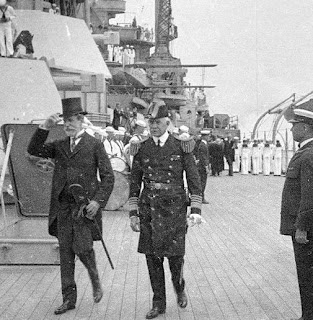 On this day in ...
... 1921, in Washington, D.C., was signed a Treaty Between the United States of America, the British Empire, France, and Japan, by which the 4 countries agreed to "respect" one another's "rights in relation to their insular possessions and insular dominions in the region of the Pacific Ocean." This Four-Power Pact, as it was known, was among several agreements reached in the Washington Naval Conference that had begun the previous month and would run till the next February. Convening the conference outside the aegis of the League of Nations was U.S. President Warren G. Harding; leading the U.S. delegation was Harding's Secretary of State, Charles Evans Hughes, later Chief Justice of the United States. (credit for 1922 photo of Secretary Hughes, in top hat, aboard U.S. Navy ship bound for Brazil's Centennial Exposition).