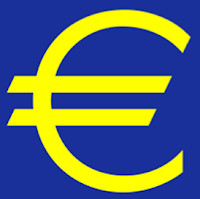 On this day in ...
... 1995 (15 years ago today), on the 1st day of a 2-day summit in Madrid, Spain, European leaders unanimously agreed on a timetable for introduction of "a single, unifying currency for the 21st century," which they called the euro (symbol at left). According to The New York Times, the agreement marked an effort by

many European leaders to forge a single currency and a broader economic and political integration of the Continent that they hope will invigorate its flagging economy and insure greater political stability and peace.

The euro would become legal tender at the stroke of midnight January 1, 2002 (at which moment this 'Grrl acquired a mint set of coins and notes, in Salzburg, Austria), and go on to have more notes and coins in circulation than any other type of money, including the U.S. dollar. But it has fallen on hard times amid European economic demise these last months -- so much that some pundits now wonder whether the end of the euro is nigh.