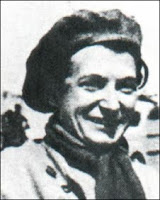 On this day in ...
... 2003, Susan Travers (left) died in the Paris area, 94 years after her birth in southern England. The daughter of an admiral, she grew up "a young tennis-playing socialite in the south of France," and eventually "became the first and only woman ever to serve" in the French Foreign Legion. Her sojourn began with the onset of the World War II. Travers joined the French Red Cross, serving 1st as a nurse and later as an ambulance driver. (photo credit) She volunteered as a driver for Free French officers in the North Africa campaign, and took part in a month-long battle with Nazi Germans at Bir Hakeim, Libya. Officially admitted to the Foreign Legion's ranks, Travers, "creating her own uniform," served in Vietnam, then married another legionnaire and retired to Paris. Travers published a memoir shortly before her death.