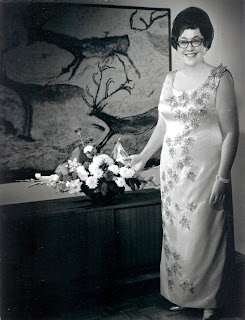 On this day in ...
... 1924, Judy LaMarsh was born in Chatham, Ontario, Canada. She served in the Canadian Women's Army Corps during World War II, earned her law degree from Osgoode Hall at the University of Toronto, and joined her father's law practice at Niagara Falls. In 1960 she was elected to Canada's House of Commons. Eventually she became the 2d woman to serve as a Cabinet Minister. "[C]ontroversial," LaMarsh was Minister of Health and Welfare when a national pension plan was introduced. LaMarsh set up the country's Royal Commission on the Status of Women, on which we've posted. In 1967, while Secretary of State, she presided over Canada's Centennial celebrations. (credit for portrait of Secretary LaMarsh in maple-leaf-festooned gown she wore during the Centennial year) After retiring from politics, she wrote Memoirs of a Bird in a Gilded Cage (1969). LaMarsh died of cancer in 1980, at age 55.