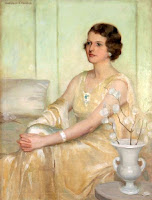 On this day in ...
... 1890 (120 years ago today), a daughter, Lila, was born into a Presbyterian cleric's family in Virden, Manitoba, Canada. The family moved to the midwestern United States, where she grew up. In 1917 she earned a degree from the University of Oregon and became a social worker. A few years later she married a book salesman, and together they founded the Reader's Digest. An active editor, Lila Bell Acheson Wallace (right) owned 48% of the magazine. The couple received the Presidential Medal of Freedom in 1972. She also served as a director of the New York Central Railroad from 1954 to 1959 -- the 1st woman to serve as a railway director in the United States. She won a 1992 National Medal for her arts patronage. When she died in New York in 1984, her estate was valued at half a billion dollars. (credit for portrait of Wallace by Marguerite Stuber Pearson)