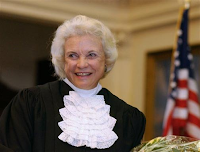 Among those who spoke out in favor of U.S. ratification, in anticipation of mid-November Senate subcommittee hearings on CEDAW, the Convention on the Elimination of All Forms of Discrimination Against Women, was Sandra Day O'Connor (right), the 1st woman ever to serve on the U.S. Supreme Court. (hat tip)
The November 17 letter to U.S. Sen. Richard Durbin (D-Ill.) by the former Justice, who served from 1981 to 2006, deserves quotation at length. Here goes:

In my view, this is an important treaty, and it is appropriate that it be considered by the Senate. CEDAW currently has 186 countries which have ratified, including our closest allies. The United States is the only country to have signed, but not ratified, the Convention. Our non-ratification leaves us in the company of the few remaining non-party countries, including Iran and the Sudan. This is not the company we normally keep, and this fact should inform the Senate's consideration of CEDAW.
The United States has made great strides in supporting women's rights. I support CEDAW not because I think it would require changes in women's rights within the Uni

ted States. Rather, ratification of CEDAW would enhance the authority of the United States to advocate on behalf of women's rights in countries, including both CEDAW parties and non-parties, that do not respect women's rights to the same extent that the United States does. The Senate's failure to ratify CEDAW gives other countries a retort when United States officials raise issues about the treatment of women, and thus our non-ratification may hamper the effectiveness of the United States in achieving increased protection for women worldwide.
A number of countries have ratified CEDAW with reservations, understandings, and/or declarations. The number includes countries like Australia, which has a federal system similar in some ways to our own. It also includes France, Germany, Ireland, and the United Kindgdom. To the extent that Senators have serious concerns about the substance of particular provisions of the Convention, perhaps their concerns could be addressed with a carefully crafted package of reservations, understandings, and declarations.

Next Senate steps regarding efforts toward U.S. ratification of the almost 31-year-old treaty (prior IntLawGrrls posts) are uncertain: a post-hearing Google search points to the same pro and con camps as always.
by Diane Marie Amann at 6:00 AM