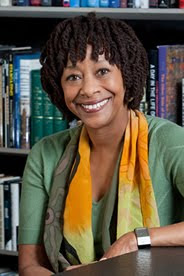 This year’s session focused on “minorities and effective participation in economic life”—a timely and significant topic given the ravages of the global economic crisis on minority groups throughout the world. (See coverage by Minority Rights Group International (MRG) here.)
According to Forum Chair Dr. Gita Sen, Professor, Indian Institute of Management and Adjunct Professor, Harvard School of Public Health,

Times of economic crisis can be particularly difficult for minority groups that may already be subject to societal discrimination and stigma, and who may be undocumented or migrant workers. Societal pressures to blame those who are the most vulnerable can become explosive unless governments play a moderating role and act as guarantors of protection from violence and abuse.

Draft Recommendations
Consultations centered on the associated Draft Recommendations on Minorities and Effective Participation in Economic Life. The draft served as a platform from which we could explore the roles of minority groups as economic actors and as participants in their own empowerment. Governments, business enterprises, international financial institutions, and other actors share the responsibility to provide the necessities and rights that sustain all groups and individuals. But they also bear affirmative responsibilities to remove barriers to minority groups’ own efforts to build a sustainable and human rights-based future.
Previous sessions of the Minority Issues Forum resulted in recommendations on “Minorities and the Right to Effective Political Participation” (2009) (see also Gay McDougall’s post on the session here) and recommendations on “Minorities and the Right to Education” (2008).
The Diversity of Minorities
The meetings bring together individuals from minority groups and civil society, diplomats from UN and regional organizations, and academic experts to share ideas and to make action-oriented recommendations. The Forum’s mandate is to assist in the further implementation of the Declaration on the Rights of Persons Belonging to National or Ethnic, Linguistic and Cultural Minorities
This year’s session was attended by approximately 500 participants, including 300 members of minority groups or their representatives, as well as attendees from government permanent missions. The proceedings follow a participatory and inclusive approach, encouraging oral and written interventions by as many participants as time permits.
The fact that many women were represented among the key speakers and participants was perhaps not surprising given McDougall’s leadership, but very welcome nevertheless. The presence of women was not merely symbolic, since minority group issues that have special impact on women were prominent on the agenda and in the draft recommendations. An intersectional perspective, in which both minority status and gender implications are taken into account, was evident throughout the program.
As noted above, the Forum was chaired by Dr. Gita Sen. UN High Commissioner on Human Rights, Navanethem (Navi) Pillay (photo, left) opened the proceedings along with the President of the Human Rights Council, H.E.

Ambassador Sihasak Phuangketeow.
“Economic Life” in Multiple Dimensions
The Draft Recommendations and Forum addressed a wide range of issues, evidencing the fact that “the economy” implicates all aspects of life, including civil, political, social, and cultural spheres.
Key themes reflected from the Draft Recommendations included:
► Sustainable Livelihoods;
► Work and Social Security;
► Meaningful Consultation/Participation;
► Capacity-Building for Effective Participation;
► Poverty Reduction and Development Strategies;
► Minorities and the Millennium Development Goals; and
► Discrimination and Positive Measures/Affirmative Action.
The presenters highlighted barriers to the effective participation of minorities in economic life. Failure to protect and promote the language rights of minorities, for example, also prevents full participation in education, training, and employment. Gender discrimination, in combination with racial, ethnic, religious, or cultural discrimination, marginalizes or exploits women’s roles in economic and social development. Religious, ethnic, or racial restrictions on land ownership, use, transfer, or title may lead to entrenched poverty among minority groups. Violence and the promotion of hatred against racial, ethnic, or national minorities may marginalize or exclude their participation in the building of society as a whole or exacerbate broader conflict. See McDougal’s recent statement on links between protection of minority rights and the prevention of violence and conflict here. Unsustainable or top-down farming or land distribution practices prevent pastoralists, indigenous peoples, and other minority groups from pursuing sustainable livelihoods for themselves and their families. Such practices may also destroy cultural traditions and ways of living that sustained groups for generations. Policies pursued by business enterprises and international financial and trade institutions may intensify the impact of human rights violations or exclude minority groups from the benefits of human and social development efforts.
Participants also noted some positive developments and best practices. For example, a participant described recent successes in providing effective compensation for African-American farmers damaged by racial discrimination in the United States of America, although more remains to be done for Native American, Latino, and women farmers.
Side Events
Side events on the first day of the Forum included a “Panel on Economic, Social, and Cultural Rights and the Application of the Minorities Declaration” organized by the Indigenous Peoples and Minorities Section of the UN Office of the High Commissioner for Human Rights. A panel on “Minorities and Natural Resources” was co-sponsored by the Underrepresented Nations and Peoples Organization (UNPO) and Minority Rights Group International.
A preparatory workshop organized on 13 December by the UN Office of the High Commissioner on Human Rights and the Minority Rights Group, included several moving presentations on national conditions for minority groups from Uganda, Iraq, Lebanon, Ireland, the United States, and Pakistan.
Formal presentations at the Forum itself were followed by a series of brief interventions by other participants.
Minority groups from Asia, Africa, Europe, and the Americas highlighted concerns or made comments on issues to be addressed by the Draft Recommendations, including
►The status of women pastoralists in Uganda;
►Access to economic participation, land, and employment for Palestinian minority groups;
►Evictions and demolition of public housing, mortgage abuses, violations of land rights, gentrification, and unemployment disproportionately affecting African-Americans and other minority groups in the United States;
►Deportations, displacement, lack of access to employment, education, and health care among Roma peoples in Europe;
►Displacement and other abuses against Ahwazi Arabs, the Oromo and the Degar (Montagnards) (see UNPO report here).
Outcomes
As chair of the Forum, Dr. Sen is responsible for preparing a summary of the proceedings and submissions that will be made available to the participants and members of the public early in 2011. Independent Expert McDougall will present the Forum’s final recommendations to the UN Human Rights Council in March 2011.
The first photo below 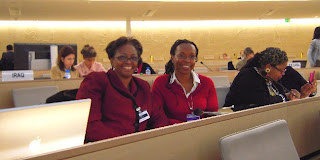 shows 3 U.S.-based participants during a break (from left) Dr. Carol Anderson, Professor of African-American Studies and History, Emory University, Ms. Kaleema Haidera Al-Nur, Director, Kindred Afro-American Alliance (Kaleema@kindredonline.org ), and (spending too much time with her nose in her computer) yours truly, IntLawGrrl Hope Lewis , Professor of Law and Chair, Committee on Global Law