Twenty-eight years ago, on December 10th, 1982, 119 nations signed the United Nations Convention on the Law of the Sea, a convention that the United States has yet to join. It was written recently that the American government can no longer approve treaties, at least not ones of importance. While IntLawGrrls Diane Marie Amann made a convincing counterargument, the case of the United Nations Convention on the Law of the Sea (prior posts) could leave one pondering the issue again. (credit for photo of 1982 U.N. law of sea conference in Montego Bay, Jamaica)
UNCLOS is recognized worldwide as one of the great accomplishments in modern international law. Responding to changes of ocean use that were undermining the three-century-old Grotian regime of free seas, negotiators labored for more than a decade to craft a convention that benefited all nations. Then they labored another dozen years to resolve the last of the concerns, enumerated by President Ronald Reagan, which had previously kept the United States from joining the Convention.
Though it can be intimidating in its scope and detail, the Convention has garnered the support of the U.S. Navy and Coast Guard, the energy, transportation, fishing and telecommunications industries, and non-profit organizations committed to conservation, law, and international engagement. In fact, there is no international agreement in decades that has garnered such a broad and powerful body of domestic support.
In spite of this support, UNCLOS, with its partner agreement on the implementation of Part XI, has been stalled in the Senate for 16 years.
For the first eight years, Senator Jesse Helms (R-N.C.), who chaired the Foreign Relations Committee, refused all requests for hearings. In 2003, when Helms retired and Senator Richard Lugar (R-Ind.) took his place, the Convention moved smoothly through hearings and unanimous approval in committee, but was brought to a halt by Senate Majority Leader Bill Frist (R-Tenn.).
After Democrats took control of the Senate in 2007, the Convention was once again approved in committee -- only to have George W. Bush’s support disappear in light of the foxhole conversion of Senator John McCain (R-Ariz.) to opposition to the Convention during his campaign for the Republican nomination.
The Convention returned to the Senate Foreign Relations Committee again at the beginning of 2009. The new administration of President Barack Obama listed the Convention as one of 17 “priority” treaties, but never placed it above the economy and other domestic issues in the Administration’s legislative agenda. Without active Presidential support, the Senate declined to act.
At the beginning of 2011, the Convention will automatically return to the Senate Foreign Relations Committee to start the process once again.
So, should supporters of the Convention be discouraged and turn their attention and energy to other matters in 2011? That would be understandable, but it would be wrong.
The loss of 6 Democratic seats and replacement of several supportive Republicans certainly increases the effort needed to secure Senate advice and consent over the current session, during which the 2/3 majority was assured. Still, the outlook is more promising than in any other session since hearings began in 2003.
The key to approval of the Convention in 2011 lies in mobilizing a bipartisan coalition that includes Senate Democrats and Republicans, leaders of major industries, environmental groups, good governance and international engagement organizations, and respected Republican statesmen and military leaders. Most of these have already endorsed the Convention, but they won’t pull out their big guns and commit their political and financial assets unless and until the President calls on them to make common effort to secure approval.
The downside for the President is that the Convention will be subjected to all the procedural roadblocks that opposing Senators, James Inhofe (R-Okla.), David Vitter (R-La.), and Jim DeMint (R-S.C.) can devise. This includes not one but two filibusters and cloture votes -- one for adoption of the Convention and another for adoption of the resolution of advice and consent. These delays would come at the cost of floor time for other legislative issues.
In addition to the Senate battle, another contest will be fought by grassroots groups through faxes and e-mails.
Conservative and libertarian networks such as “FreeRepublic.com” and “GrassFire.org” have deluged Senate offices with thousands of messages on a moment’s notice. These communications are fraught with errors and outright lies, but the number of opposition messages puts senators on the defensive.
In the past, there have been no corresponding efforts to support for the Convention. This has to change. But just as businesses want to know that the Administration is serious before committing their CEOs and their political resources, public interest groups want to know that they will be part of a team effort and will not be abandoned by the Administration along the way. 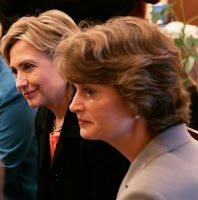 Two women leaders will be key to success in approving the Convention: Secretary of State Hillary Clinton and Senator Lisa Murkowski (R-Alaska). (photo credit) Both have been outspoken supporters of the Convention, notably during Secretary Clinton’s confirmation hearing (video clip). The commitment recently was repeated Clinton’s comments to the Commonwealth Club in San Francisco:

We're going to prioritize the Law of the Seas next year. It is critical to how we're going to manage the Arctic. It is critical to our credibility in working with nations in Southeast Asia over questions regarding activities in the South China Sea. It is so much in America's interests. And the objections to it are just not well founded. So I'm hoping that we'll be able to get a hearing on it early in the year and get a vote on it as soon thereafter as possible.

In the end, success or failure regarding the Convention on the Law of the Sea rests with President Obama, for three reasons:
► First, he, with Senate Majority Leader Harry Reid (D-Nev.), will determine where the Convention fits in the Senate’s agenda;
► Second, military leaders, always strong supporters of the Convention, will not move forward until the President directs them to do so; and
► Third, the heavy hitters of industry, environment and public interest groups will only move as part of a concerted effort with the Administration.
While Clinton and Murkowski will help lead the effort to move the Convention through the Senate, their effort cannot get underway until the President enlists partners inside and outside the government in a bipartisan and multi-sector effort to secure the support of all but the most ideological opponents in the Senate.