There is good news and bad news from the UN Climate Change Conference that just ended in Cancun, Mexico.
First the good news.
The conference produced some important steps forward:
► With one lone dissent, by Bolivia, the other 193 participants overwhelmingly endorsed the final agreement, which formalized the status of the Copenhagen Accord. That accord, about which IntLawGrrls posted here and here, thus has been officially integrated into the United Nations process.
► There was an agreement on preserving tropical forests (REDD+) that provides for compensation payments to tropical countries that reduce deforestation.
► There was also an agreement setting up a Green Climate Fund to provide financial assistance to help developing countries restrain their emissions and cope with the impacts of climate change.
These are important steps.
Given last year's failed Copenhagen meeting, expectations were very low for the Cancun 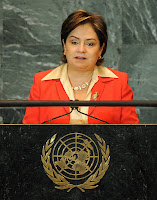 meeting. So, the conference’s modest success was encouraging in that it restored faith in the possibilities of the multilateral United Nations process as a forum where climate progress can be made. Mexican Foreign Minister Patricia Espinosa (right) earned wide praise for her transparent and deft handling of the negotiations.
Now for the bad news. . . .
The talks failed to produce any agreement ensuring reduced carbon emissions. Without drastic cuts in carbon emissions, the world will soon run out of time to avert catastrophic climate change.
The scientific evidence is clear — human activities linked to burning fossil fuel are increasing carbon dioxide levels in the atmosphere. The resultant buildup of carbon dioxide is likely to warm the planet by several degrees Centigrade in the next half-century. International efforts have identified keeping that warming below 2 degrees Celsius (about 3.6 degrees Fahrenheit) as the goal.
The effects of global warming are already clearly visible in the Arctic, where drastically reduced summer sea ice threatens the continued existence of ice-dependent animals like Pacific walrus and polar bears, while melting permafrost jeopardizes the safety and livelihoods of Arctic residents. Coral reefs are bleaching and dying at an alarming rate.
Extreme weather events around the world, including floods and droughts are a harbinger of things to come. As the planet warms 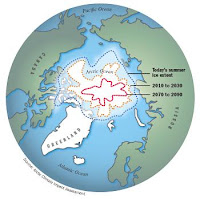 and the climate changes, we can expect disease, species extinction, water shortages, rising sea levels, and the disappearance of small island states.
In short, climate change is likely to cause conflict and dislocations around the globe.
In the face of this looming catastrophe, we need bold action. What we got is at most a modest step forward.
The Cancun Agreement calls on countries to take “urgent action” to keep global temperatures from increasing more than 2 degrees Centigrade above pre-industrial levels. It does not, however, specify what those actions should be. States have made no binding commitments to do anything. The Agreement does nothing to about the gaping chasm between the current voluntary emissions-reduction commitments that states have set for themselves under the Copenhagen Accord, and the kinds of reductions needed to meet this goal.
Alden Meyer of the Union of Concerned Scientists said it best:

World leaders must significantly raise their game if we're to meet the challenge of climate change. Time is running out, and the atmosphere doesn't negotiate with politicians.

by Rebecca Bratspies at 6:00 AM

these climate summits are just big parties where high officials from all countries spend some nice time together.All the climate summits have been a waste.the global warming continues and our polar bears continue to disappear