The Contours of Law of War Detention 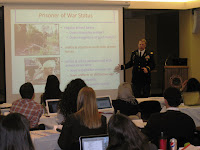 My institution recently co-hosted with the International Committee of the Red Cross an intensive workshop on International Humanitarian Law for law students. At left, is Lt. Colonel Chris Jenks of the Office of the Judge Advocate General teaching conflict classification.
This was the fifth annual such workshop, which focuses on lectures and hands-on exercises to elucidate the principles and challenges of applying humanitarian law to contemporary armed conflicts. In the past, the Workshop has culminated with a multilateral negotiation and drafting exercise focused on the intersection of acts of terrorism and the law of armed conflict. This year, participants engaged in a role play (two photos at right) in which they made comments before the House Armed Services Committee Subcommittee on Terrorism, Unconventional Threats, and Capabilities on a domestic law-of-war detention draft statute 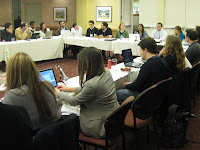 entitled the "Law of War Privileged and Unprivileged Belligerents Preventative Detention Act of 2011."
The exercise required students to debate a number of foundational issues, including:

The legislation was premised on a three-phase detention regime: 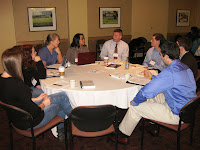 Some members of the Committee were designated as opposed to the legislation altogether; accordingly, they argued that the original Authorization to Use Military Force (AUMF) provides all the detention authority the United States needs going forward. Other testified that it is harder to justify contemporary detentions under the 2001 AUMF, especially where individuals are detained far from Afghanistan. In addition to these substantive provisions, students also discussed various procedural issues concerning conditions of detention, the handling of classified information, and access to the outside world.

Now that they have had a chance to grapple with such specifics, the students involved in this exercise will no doubt be in a better position to evaluate President Obama impending Executive Order on indefinite detention to govern current detainees.