Declaration on the Rights of Indigenous Peoples 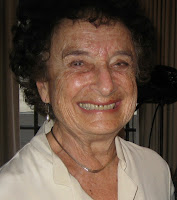 Many thanks to our friend and colleague Rita Maran (left), a lecturer on Human Rights at U.C. Berkeley and president of the United Nations Association-USA East Bay Chapter, for bringing to our attention a recent development in indigenous rights. (Long-time readers will recall we celebrated Rita's birthday a few years back with a poem...). Rita writes:

The United States recently "lend[ed] its support" to the Declaration on the Rights of Indigenous Peoples (DRIP). The US had not voted for the Declaration when the General Assembly adopted it in 2007. Canada, Australia, and New Zealand also did not vote Yes at that time, but all three states have since endorsed the Declaration; the US is the latest and last. It must be remembered that the Declaration is not a treaty, and is therefore not legally binding. President Obama announced this "change of position," attributing it in part to Native Americans' persuasion and perseverance on the issue.
President Obama told the White House Tribal Nations Conference in December 2010:

For complete details: Announcement of U.S. Support for the United Nations Declaration on the Rights of Indigenous Peoples" Statement by U.S. Government December 2010.