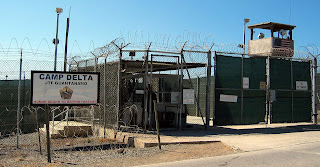 Today, January 11, 2011, marks the ninth year of the existence of the detention center (left) at the U.S. Naval Base at Guantánamo Bay, Cuba.
Translate that to measure the effect on human beings. What this means is that scores of men have been detained by the United States for nine years now, in prison-like conditions, without trial.
Detention for nine years without trial.
If I appear impassioned, forgive me. But, yours truly has represented Guantánamo detainees for close to nine years—almost as long as the detention camp has been around. Over the years, I have:
► Played a direct role in the litigation journey that ended in the U.S. Supreme Court judgment in Boumediene v. Bush (2008) (prior posts).
► Seen several bills pass in attempt to restrict the rights of the detainees.

► Seen numerous military commissions start and stop. Child soldier Omar Khadr (right), whom I represented for a short time, has faced no fewer than three different military commissions, operating under different rules.
► Seen my clients on hunger strike. And I heard from my fellow habeas counsel the stories of attempted suicides, successful suicides and whispers of homicide. In total, six men have died in custody.
A lot has happened in these last nine years, though for the detainees there, frankly, too little has happened. In those circumstances nine years can seem like a lifetime. And for some of those men, detention at Guantánamo may be a lifetime.
This brings us to the current state of Guantánamo and the detainees.
Of the original 779 detainees, 599 have been released, but 173 men remain in the detention camp. Despite the executive order issued by President Obama in January 2009 that calls for the closure of the detention camp within a year, which I wrote about here, Guantánamo remains open. And as posted by IntLawGrrl Diane Marie Amann this weekend, the most recent piece of legislation signed into law just a few days ago—The National Defense Authorization Act for 2011—makes it clear that closing Guantánamo will be very difficult. This Act:
► Prohibits the use of funds authorized by the bill for the transfer or release to the United States (or any U.S territory or possession) of Guantánamo detainees, including 9/11 defendant Khalid Sheikh Mohammed, who is specifically named.
► Requires certification from a foreign country regarding the transfer of Guantánamo detainees to that foreign country. The country must certify, among other items, that it: is not a sponsor of terrorism; maintains control over the detention facility; has agreed to take steps to ensure the individual won’t take action to threaten the U.S.; and has agreed to share information with the U.S. regarding the individual.
► Prohibits the use of funds authorized by the bill to modify or construct facilities in the U.S. to house detainees from Guantánamo for detention or imprisonment in the custody of the Department of Defense.
On Friday, January 7, President Obama signed the bill into law but issued a signing statement that specifically address two of the provisions relating to Guantánamo: the restriction on transfer into the U.S. and the certification requirement from foreign countries. (photo credit) Some criticized it as weak. But as Diane's post observed, the signing statement includes a pretty clear denouncement of Congress’ attempt to intrude on executive prerogative. Obama wrote:

where to prosecute Guantanamo detainees, based on the facts and the circumstances of each case and our national security interests. The prosecution of terrorists in Federal court is a powerful tool in our efforts to protect the Nation and must be among the options available to us. Any attempt to deprive the executive branch of that tool undermines our Nation's counterterrorism efforts and has the potential to harm our national security.'

President Obama also stated that his administration would

'work with the Congress to seek repeal of these restrictions, will seek to mitigate their effects, and will oppose any attempt to extend or expand them in the future.'

The confrontation between the two branches is certainly interesting, and will require a watchful eye as to exactly how the administration will work with a new Congress that now has a

Republican majority in the House.
A more interesting and disheartening development, I believe, are reports of a pending executive order on indefinite detention.
On Sunday, Laurie Blank contributed an IntLawGrrls guest post criticizing such an attempt to routinize indefinite detention. Also well worth reading is the extended article by Dafna Linzer (right), a ProPublica national security reporter, available here. (credit for photo by Lars Klove)
According to Linzer, the White House has been busy for over a year preparing an executive order that sets forth a system for indefinite detention. This system would enable detainees to challenge their detention on a regular basis by requiring a minimal review every six months and then a more lengthy annual review before a ‘parole-like’ board made up of officials from civilian and military agencies. Further, detainees would have access to an attorney to assist them in the process. This review would not replace the court habeas review required by Boumediene, but would supplement it. In essence, the executive review would weigh the necessity of the detention, rather than its lawfulness. The ‘parole board’ would have the authority to release the detainee if appropriate.
The National Defense law just enacted, however, with its severe restrictions on transfer to third countries, would fairly undermine this assertion of executive authority.
In the end:
There are still men at Guantánamo, who by either court order or executive determination (recall the Guantanamo Review Task Force Report that identified approximately 50 men who could neither be tried or released), will continue to be detained without trial either at Guantánamo or 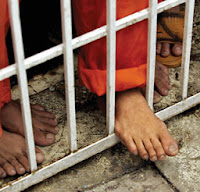 elsewhere.
It has already been nine years of detention for the men at Guantánamo, and recent events only confirm that indefinite detention may very well be a reality for some of these men. Equally disturbing, it may very well be a permanent part of our democratic society.
by Kristine A. Huskey at 6:00 AM