Look On! Asylum Cases Brought to the Theater

(Look On! takes occasional note of noteworthy films and stage productions.)
Playwright Jefferey Solomon has written two exceptional plays based upon real asylum claims and cases brought in United States immigration courts. The first, De Novo, depicts the case of a fourteen-year-old boy named Edgar Chocoy who fled Guatemala City when MS-13, the largest gang in Central America, put a hit on his life. He traveled over 3,000 miles through the desert, and across the borders of three countries in search of his mother who had left him at the age of six months to work in the United States. Detained by the Department of Homeland Security upon his entry, Edgar, normally quiet and timid, spoke clearly and loudly about his fear of being deported: “I’m afraid to go back. They’ll kill me.” A pro bono immigration lawyer helped Edgar argue his asylum case in Denver, but the Immigration Judge ordered Edgar deported to Guatemala. He was murdered seventeen 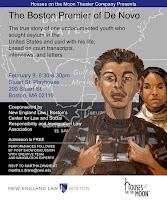 days later. The play weaves together court transcripts, interviews, letters and other documentary sources to reconstruct the gripping and poignant true story of the case whose outcome prompted a national outcry and a fundamental reconsideration about the way in which the government handles the many thousands of unaccompanied minors in immigration custody.
The second play, Tara's Crossing, tells the story of a transgendered asylum seeker from Guyana and her uphill battle to prove her claims of persecution from within the confines of U.S. Immigration Detention. The play, inspired by interviews with asylum seekers from around the world, deals with the hurdles that lesbian, gay, bisexual, and transgendered asylum seekers and refugees face in proving that their fears of persecution are well founded particularly when detained.
Solomon’s theater company, Houses on the Moon, based in New York City, aims to educate the public about the perils that vulnerable asylum seekers face navigating US immigration procedures and laws, particularly as most are unrepresented. As IntLawGrrl Jaya Ramji-Nogales has documented in her co-authored pieces on asylum claims, the likelihood that an asylum seeker will be successful when unrepresented by an attorney falls to about 14%.
The Boston premiere of De Novo, presented by New England LawBoston’s Center for Law and Social Responsibility, will take place at the Stuart St. Playhouse on Wednesday February 9th at 6:30 with post play discussion with the artists and law professors to follow. The show is free and open to the public (rsvp to Martha.S.Drane@nesl.edu).
by Dina Francesca Haynes at 6:16 AM