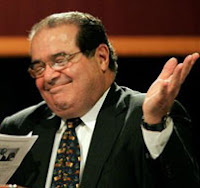 'I don’t even have to read the briefs, for Pete’s sake.'

-- U.S. Supreme Court Justice Antonin Scalia (right), in a just-published interview with California-Hastings Law Professor Calvin Massey, about which we also posted here. (2008 photo credit) Scalia spoke in explanation of the scope of questions that he deems easily decided by his originalist approach to constitutional interpretation. In the Justice's words:

'We don’t have the answer to everything, but by God we have an answer to a lot of stuff ... especially the most controversial: whether the death penalty is unconstitutional, whether there’s a constitutional right to abortion, to suicide ....'