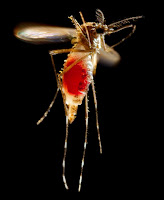 -- Our colleague Anastasia Telesetsky (below right), Associate Professor at the University of Idaho College of Law, in an ASIL Insight. She details recent international legal efforts to regulate the production and distribution of living modified organisms – biotech products like disease-free mosquitoes. (credit for Centers for Disease Control photo of genetical ly engineered mosquito) Such products are known in the field as LMOs, but perhaps more commonly as GMOs, or genetically modified organisms. (prior post) The most recent international legal effort, and the focus of Telesetsky’s Insight, is the Nagoya-Kuala Lumpur Supplementary Protocol, a multilateral treaty that won the support of 116 states at a October 2010 session including parties to the 1992 Convention on Biological Diversity and to the 2000 Cartagena Biosafety Protocol to that convention.
by Diane Marie Amann at 5:00 AM