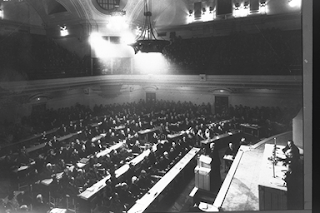 On this day in ...
... 1946 (65 years ago today), in London, the U.N. General Assembly met for the 1st time ever. (credit for U.N. photo of British Prime Minister Clement Atlee giving an opening address) The lead of The New York Times' page 1 story, written by James B. Reston, captured the significance of this post-World War II event:

The fifty-one nations of the greatest war-time coalition in history, representing four-fifths of the people in the world, started today another chapter in man's melancholy search for peace and security.
One hundred and forty-seven days after the close of the war that cost more than 20,000,000 casualties and left countless millions homeless, and on the twenty-sixth
anniversary of the ratification of the ill-fated League of Nations Covenant, the nations met this afternoon in the blue and gold auditorium of the Central Hall of Westminster ....