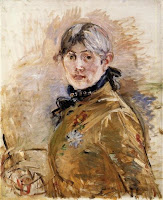 On this day in ...
... 1841 (170 years ago today), Berthe Morisot was born in Bourges, France. Along with her sister, Edma, said to be the granddaughters of painter Jean-Honoré Fragonard, she began painting in childhood. The 2 studied with leading painters in Paris. "Despite the fact that as women they were not allowed to join official arts institutions, the sisters earned respect in art circles for their talent." Although Edma eventually would spend more time on family matters than on painting, Berthe, in her late 20s, joined the circle of artists who would create Impressionism. She married into the Manet family and exhibited her paintings every year but 1877, when she gave birth. A recent retrospective prompted an 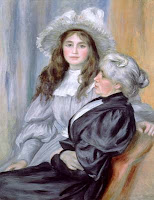 intriguing article on Morisot's treatment of gender, inspired in part by the 1885 self-portrait above left. (credit) In 1895, Morisot, 54, died from pneumonia contracted while caring for her only child -- the teenaged Julie Manet, who would herself become a painter and art collector. (credit for Pierre-Auguste Renoir portrait of mother and daughter made the year before Morisot's death)