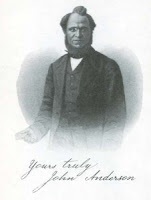 On this day in ...
... 1861 (150 years ago today), despite freezing weather, hundreds rallied in Montreal to protest a Toronto court's acquiescence to American demands for the return of an escaped slave accused of killing a man. The accused, John Anderson (left), was among the estimated 20,000 escapees who'd fled to Canada since the 1850 enactment of a strict U.S. requiring northern states to return slaves. (photo credit) On appeal, another court would permit Anderson to remain in Canada.