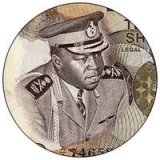 On this day in ...
... 1971 (40 years ago today), BBC reported that General Idi Amin had staged a coup d'état while the president "who led Uganda to independence" was attending a conference of the British Commonwealth in Singapore. Ugandan troops had closed the aiport at Entebbe and were blocking roads and patrolling the capital, Kampala. In subsequent days the President, Dr. Milton Obote, who had become the country's 1st Prime Minister in 1962, would go into exile in Tanzania. The brutal regime of Amin (left) would last till 1979, when he went into exile in Saudi Arabia, dying there in 2003. (photo credit) Obote was reelected President in 1980, thrown out by another coup in 1985, and now remains in exile in Zambia. The current President, Yoweri Museveni (prior post), has ruled since 1986.