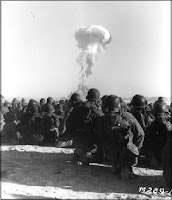 On this day in ...
... 1951 (60 years ago today), the United States conducted its 1st atomic-bomb test at Nevada Proving Ground, "a large swath of unpopulated desert land 65 miles northwest of Las Vegas" designated for the purpose by the Atomic Energy Commission. (photo credit) The "tremendous explosion" from the atmospheric test caused a "flash ... seen as far away as San Francisco." Within years testing, which had included exposing soldiers to radiation for study purposes, changed:

By 1957, though, the effects of radioactivity on the soldiers and the surrounding population led the government to begin testing bombs underground, and by 1962, all atmospheric testing had ceased.