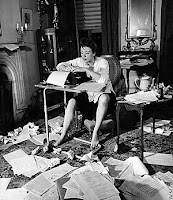 On this day in ...
... 1911 (100 years ago today), Rose Louise Hovick was born in Seattle, Washington. Her parents divorced when she was very young, and she and her sister supported themselves and their stage mother by performing in vaudeville. Rose would become the well known burlesque dancer, Gypsy Rose Lee, about whom a couple centenary biographies, "each by a female academic," have just been published. Less well known is her authorship of The G-String Murders (1941) and another mystery. (photo credit) Also less known, her political endeavors: Lee was among several Americans who raised money for anti-Franco forces during the Spanish Civil War. She died from lung cancer in 1970.