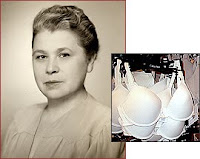 On this day in ...
... 1886 (125 years ago today), Ida Kaganovich was born in the city of Minsk, then in Russia, now, Belarus. As an 18-year-old she emigrated to be with her fiancé, and the couple married a few years after she arrived in the United States. Ida Rosenthal (far left), who "held socialist ideals and believed in women's rights," bought herself a sewing machine and began working independently as a seamstress. Eventually she and Enid Bisset opened a Manhattan dress shop; together, they invented a bandeau-with-cups, called a brassiere, that became the foundational garment of their Maidenform shapewear empire. (credit for PBS collage of photo of Rosenthal courtesy of Elizabeth Coleman, and of bra courtesy of WGBH) Outliving both her husband and her business partner, Rosenthal "died of pneumonia in 1973," in New York City," leaving the multimillion dollar family company to her daughter, Beatrice."
(Prior January 9 posts are here, here, and here.)
by Diane Marie Amann at 4:04 AM