A long-exiled leader's come home and offered to save his country -- if only someone would free up his assets, frozen for the last year.
Suspicious, but not sure why?
Good time for a good read of The Comedians, the 1965 novel in which Graham Greene painted a picture of the Haiti of the time.

It was, as Greene famously wrote, a "Nightmare Republic" (p. 50), in which paramilitary thugs in dark glasses -- nicknamed after evildoers of Haitian folklore, the Tontons Macoutes -- served the ends of a corrupt regime by killing, maiming, terrorizing, anyone, anytime. Among those caught up were Graham's "comedians," 3 of the many outsiders who, in myriad ways, mired themselves in Haiti's woes.
At the head of that nightmare regime?
François Duvalier, known to all as "Papa Doc" (below, far left). Once a respected physician, following his election in 1957 he ruled with an increasingly brutal hand until his death in 1971. Succeeding him was his son Jean-Claude (below, near left), whose 15-year regime likewise was marked by killings, torture, and corruption. (photo credit) 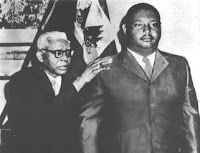 As Hope posted, it is that son, "Baby Doc," now 59, who's returned to Port-au-Prince. And though prosecutors may thwart his goal, it seems he wishes to play a self-styled, and highly suspect, role of Haiti's savior.
by Diane Marie Amann at 6:14 AM