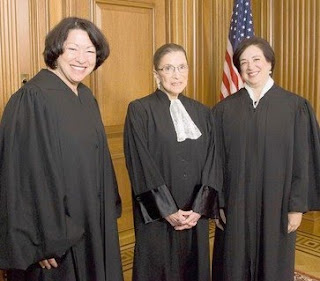 women judges (men too of course) have to be recognised as smart, fair, and hardworking if they are to wield influence ...

It appears the 2 newest arrivals to the U.S. Supreme Court got an advance copy.
Appears, too, they've heeded this sage advice from Wald, onetime Judge on the International Criminal Tribunal for the former Yugsolavia and Chief Judge of the U.S. Court of Appeals for the District of Columbia Circuit.
Judging from recent reports, 2 voices are likely to be heard once the Court takes the bench to hear oral arguments this morning: the voices, that is, of Justices Sonia Sotomayor (above left) and Elena Kagan (above right). (credit for Dec. 26, 2010, Steve Petteway/Supreme Court / photo, also depicting Justice Ruth Bader Ginsburg at center)
Since Kagan was seated at the beginning of this October Term 2010, "the tenor of the debate has changed," David Savage, Supreme Court correspondent for the Los Angeles Times, recently reported. For years, he wrote, "Supreme Court conservatives led by Justice Antonin Scalia dominated the debates during oral arguments." But now Sotomayor and Kagan "have joined the fray and reenergized the liberal wing."
Bolstering Savage's assessment was a report by New York Times Supreme Court reporter Adam Liptak. The title pretty much said it all: "Sotomayor Guides Court’s Liberal Wing." She does so, he wrote, by close questioning and incisive commentary that, taken in combination, reveal -- dare one say empathy? Liptak preferred to say that

she has displayed a quality — call it what you will — that is alert to the humanity of the people whose cases make their way to the Supreme Court.

An example of this combination, from an article by the Wall Street Journal's Jess Bravin, regarding a recent oral argument on California prison conditions:

Amid reports that these new, "smart, fair, and hardworking" Justices may be shifting balance on the Court, Justice Scalia publicly renewed his attacks on substantive due process applied to enforce rights of women (and, here, gays).
Coincidence?
by Diane Marie Amann at 6:00 AM