Update from the ECCC 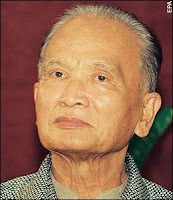 The Pre-Trial Chamber of the Extraordinary Chambers in the Courts of Cambodia today confirmed and partially amended the Closing Order (analogous to an indictment) against the four regime leaders in custody and destined to become Case 002 before the ECCC. The four remain in provisional detention.
The accused filed appeals filed against the Co-Investigating Judges' Closing Order. Most of the grounds of appeal were dismissed, but the

conflict, confirming that the so-called war nexus (about which we've blogged before) remained an element of crimes against humanity in the Khmer Rouge period. In addition, the PTC ruled that rape per se was not an enumerated

crime against humanity at this time, but it was an "inhumane act" and so remained prosecutable under that moniker.