Sustained cooperation on climate change is within political reach, this I believe.
International treaties are seldom accomplished inside a day. At its core, the Cancun Agreements adopted during the recent 2-week conference in that Mexican city (prior IntLawGrrls post) set forth these objectives:
► Greenhouse gas mitigation by all countries;
► An Adaptation Framework;
► A Technology Transfer Mechanism to facilitate environmentally sound technology- and capacity-building;
► A new U.N. Green Climate Fund;
► Measurable, reportable, and verifiable inspections for the United States, China, and other major emitting countries;
► Scientific review after five years; and
► Forestry consensus to fund countries to avert deforestation.
There could not have been a greater contrast between Cancun and Copenhagen, the 2009 conference on which IntLawGrrls posted here, here, here, here, here, here, here, and here.
In the frozen northern city creativity abounded -- gaining the spotlight. Civil society spelled out "350" holding blazing torches in the snow.
In the southern city, demonstrations were displaced by armed forces, keeping the most recent U.N. climate change conference – known by its acronym COP 16 – a high-end diplomatic affair. Surreal resorts along Cancun's Maya Riviera hosted subdued forums patching back together trust in multilateral climate cooperation. Countries are "now walking in the right direction, but they need to start running," Tim Gore of Oxfam International noted.
U.N. Secretary General Ban Ki-moon called upon the international community to "think big, connecting the dots between poverty, energy, food, water, environmental pressure and climate change."
The floods in Pakistan and fires in Russia are the latest bells tolling an alarming wake-up call. It brings to mind these famous words, written by the poet John Donne in 1624: 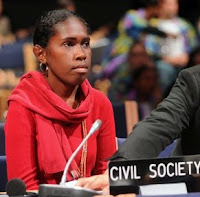 No man is an island, entire of itself; every man is a piece of the continent, a part of the main. If a clod be washed away by the sea, Europe is the less, as well as if a promontory were, as well as if a manor of thy friend's or of thine own were: any man's death diminishes me, because I am involved in mankind, and therefore never send to know for whom the bell tolls; it tolls for thee.

The spoken and unspoken calls of children, women, and men – of terrestrial and marine life are coalescing. Time will not gain patience – we must channel the urgency into collective action to address climate change. "You have been negotiating all my life. You cannot tell us that you need more time," Christina Ora of the Solomon Islands, challenged a collection of 193 countries. (credit for photo of Ora speaking during COP 15)
I have participated in these negotiations since 1991, helping to draft the U.N. Framework Convention on Climate Change to stabilize atmospheric concentrations of greenhouse gases. The goal is still elusive, but this 1992 Convention has 194 parties, who meet annually.
All eyes are on Durban, South Africa, where COP 17 will be held from November 28 to December 9, 2011. (image credit) There we may yet weave together international consensus for a post-2012 framework to mitigate, adapt, innovate, and fund a meaningful transnational climate response.

As Gandhi noted, we must be the change that we wish to see in the world.
by Elizabeth Burleson at 6:00 AM