A crime against humanity trial in South Kivu, DRC: Proof Complementarity Can Work 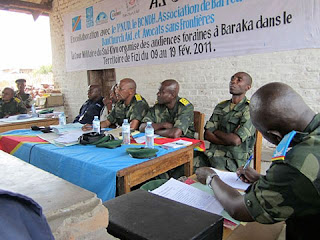 When the International Criminal Tribunal for the former Yugoslavia (ICTY) exploded on the justice scene in 1993, a refreshing effort against impunity for war crimes, crimes against humanity, and genocide began. A year later, the establishment of the International Criminal Tribunal for Rwanda (ICTR) signaled that the United Nations and international community were recognizing that the accepted practice of letting mass murderers and rapists off scot free denigrated respect for the rule of law and threatened international peace and security. By 1998 the Statute for a permanent International Criminal Court (ICC) was signed in Rome and the court became operational in 2002. It now has cases/situations in Uganda, the Democratic Republic of Congo, the Darfur region of Sudan, the Central African Republic, and Kenya.
While the ICC was being established, mixed domestic and international war crimes chambers were set up to prosecute the highest level persons accused of horrific crimes in Sierra Leone, East Timor, Cambodia, Bosnia, and Kosovo. In these courts, hacking off limbs, extermination, rape and sexual slavery, torture, forced displacement, and a slew of other heinous offenses against large numbers of innocent civilians are commonplace. (A mixed court was also set up to try murder by assassination in Lebanon).
Eighteen years since the global paradigm began to shift from blanket impunity toward accountability for the most serious international crimes, there is now broad recognition that international and mixed courts can handle only a small number of the most senior culpable civilian and military leaders and the most notorious physical perpetrators. Thousands - perhaps millions - of others will escape punishment in these specialized courts for the tens of millions of victims of atrocity crimes committed during war and brutal oppression worldwide.
It is the primary responsibility of national jurisdictions to enforce the law and punish those who break local and international laws, and only when states are truly unable or unwilling to investigate or prosecute should internationalized courts step in. This concept - known by ICC supporters as complementarity, since domestic trials 'complement' the efforts of the ICC which tries higher lever suspects typically out of reach of national courts - is well at work in some discrete areas of the Democratic Republic of Congo.
Here, in South Kivu, a mobile gender justice court (pictured above right) has already prosecuted over 150 individuals in the past 18 months, and is currently holding a rape as a crime against humanity trial against Lieutenant Colonel Kibibi Mutware (pictured below left, in handcuffs) and 10 of his soldiers for the mass rape and other crimes committed in Fizi.
Professional military judges, prosecutors, defense counsel and civil party lawyers have been studiously adjudicating the case for over a week, and hundreds of locals have turned out daily to observe their firs 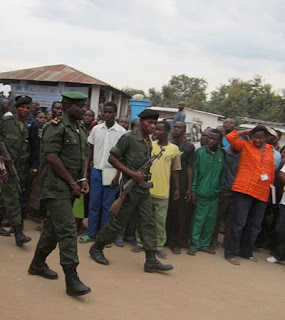 t trial ever. They are clearly fascinated and enthralled by the process. For many, it brings a glimmer of hope for the future.
As indicated in two previous blogs (here and here), I too have been observing the mobile court trial for the past few days. During this time, I have been most impressed with the proceedings, which have been as professional and fair as many trials I've observed in international and mixed tribunals. The trial assuredly has been far more expeditious than other legitimate atrocity crimes trials, being held some 6 weeks after the crimes were committed. The local police, the UN and NGOs participated in the investigation.
Colleagues and I have asked survivors here if they've heard of the ICC, where the DRC trials of Lubanga and Katanga-Ngudjolo are underway and the Mbarushimana trial is expected to begin soon. Relatedly, Bosco Ntaganda is still at large and apparently roaming around freely in Goma. Former Congolese Vice President Bemba is on trial at the ICC for principally sex crimes committed in Central African Republic. In general, unless they listen to the radio regularly, victims and others here in this very remote area of Congo are unaware of the ICC. That is not particularly surprising, as the other trials (not including Mbarushimana, which hasn't started yet), were committed outside the Kivus. Contrarily, as my OSISA colleague Louise Olivier reported yesterday (here), some of the accused, including the leader, apparently have. Kibibi reportedly assured his troops before the orchestrated attack on New Years Day that they wouldn't go to The Hague for this.
Unquestionably, Lt Col Kabibi and his soldiers are more than a little stunned to find themselves on trial before this groundbreaking domestic mobile court. If word about the court is spread around the country, it could have an enormous impact on deterring future crimes, now that the rule of law is finally being enforced domestically, to at least some extent, in parts of eastern DRC. If other crimes could be prosecuted as seriously as gender crimes - the DRC government hates being known as the rape capital of the world - genuine progress on respecting the rule of law, maintaining order, and creating stability and prosperity is not only possible, but probable.

(credit to Galya Ruffer for photos of the Fizi trials)

Thank you for sharing this article. I'd love to know more about the latest news on the crime against humanity in South Kivu.
criminal defense lawyer los angeles