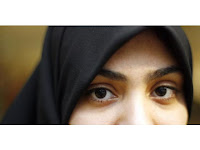 The world has watched, spellbound, over the past few weeks as North Africans have taken to the streets to oust authoritarian and arbitrary regimes. But the recent unrest also provides an unfortunate reminder of the arbitrary and authoritarian treatment to which immigrants, even documented, are subject right here in America. The story of Samaa Kerba (pictured left), a lawful permanent resident who tried to return to the United States from Egypt with her 4-year old US citizen son last weekend offers insight into the excessive discretion placed in the hands of the government officials assessing the national security threat posed by non-citizens (as I've described in more detail here).
Kerba, who sought to return to her home in Los Angeles to flee the turmoil in Egypt, was stopped in transit in Amsterdam last Thursday, presumably because she had been placed on the FBI's No Fly List. An airline official told her "America does not want you to get on this flight. You can't enter the plane." When they told Kerba she and her son would be sent back to Cairo, she contacted the ACLU. Ahilan Arulanantham, who directs the immigrants' rights and national security program at the ACLU of Southern California, filed a temporary restraining order on her behalf, arguing that the government's actions violated both the immigration statute and the Due Process Clause. By the end of the day, the government agreed to let Kerba return to Los Angeles.
The government did not tell Kerba why she was on the No Fly List. She and her lawyers assume that it is because of her now deceased husband, Daniel Abdullah, an Egyptian-born U.S. citizen. Kerba became estranged from Abdullah in late 2009 after Abdullah travelled to Somalia to further his religious education. Kerba, who did not agree with Abdullah's decision, had limited contact with her husband afterwards. Abdullah was killed in Somalia last November, but the FBI continues to question Kerba at airports about her husband, most recently at Los Angeles International Airport upon her return last Saturday.
Kerba was lucky in that her lawyer was able to mount a speedy and successful challenge that enabled her to return to the US immediately. Unfortunately, that's not the case for many immigrants in her situation. In a recent example, in the UK last month, a Border Agency official was sacked for adding his wife's name to a list of terrorist suspects. After a trip to Pakistan to visit family, his wife was unable to return to the UK for three years. The dangerous combination of heightened discretion in the hands of government officials and minimal political power in the hands of non-citizens has led time and time again to such abuses in the United States and beyond. As I've written before, human rights law and standards should be incorporated into these processes to create an institutional culture that more appropriately balances national security and due process concerns. Until then, we'll have our own sphere of authoritarianism and arbitrariness, our own little bit of Egypt right here in America.
(credit to Ana P. Gutierrez, for the Orange County Register, for the photo of Samaa Kerba)
by Jaya Ramji-Nogales at 6:16 AM

Thanks for the insightful remarks. The government has yet to confirm whether my client Ms. Kerba remains on the list, and if past practice is any guide they will refuse to do so. The only reason she got out of Egypt with her little American son is that her brother happened to know an ACLU lawyer. Justice demands a better system for the treatment of citizens and immigrants alike.