The California International Law Center at King Hall, for which I serve as founding Director, is honored to host a public address by Richard J. Goldstone (below right), on the topic of "International Criminal Justice: Its Successes and Failures," from 12 noon-1 p.m. this Thursday, February 10, here at the University of California, Davis, School of Law. Cohosting will be our students' 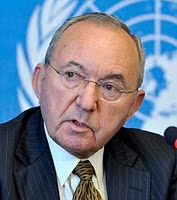 event are here.
by Diane Marie Amann at 5:00 AM