The California International Law Center at King Hall, for which I serve as founding Director, is honored to host a public address by Sir Christopher Greenwood (below right) on the topic of "The Role of the International Court of Justice in the Global Community." Posing post-lecture questions to Judge Greenwood will be California-Davis Law Professors Andrea K. Bjorklund (IntLawGrrls' very 1st guest/alumna), Anupam Chander, and yours truly.
The event will take place at 4 p.m. this Tuesday, March 1, at the 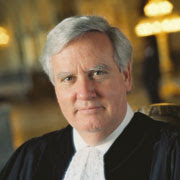 Kalmanovitz Appellate Courtroom 1001, University of California, Davis, School of Law, 400 Mrak Hall Drive.
Appointed to the ICJ in 2009, Greenwood already has sat on a number of important cases, among them the 2010 Kosovo Advisory Opinion (prior posts available here). Greenwood also has been a Professor of International Law at the London School of Economics, an arbitrator on matters involving the law of the sea and the international sale of goods, and a barrister on matters not only before British national courts, but also before international fora such as the European Court of Human Rights, the Court of Justice of the European Communities, the International Criminal Tribunal for the Former Yugoslavia, and the U.N. Compensation Commission.
Cohosting will be 2 California-Davis student groups, the International Law Society and the Journal of International Law & Policy. Also supporting this talk, as well as a session at Stanford Law and a private judges' luncheon, is the American Society of International Law.
Details on Tuesday's event are here.