An interdisciplinary and international conference entitled Languages at War: policies and practices of language contacts in conflict will be held April 7 to 9, 2011, at the Imperial War

Museum in London, England.
Kicking off the conference will be a discussion of art and war inspired by "Baghdad Car," an installation featured a bombed automobile, by prizewinning artist Jeremy Deller.

Delivering keynotes during the conference will be: Joanna Bourke (far right), Professor of History in the Department of History, Classics and Archaeology, Birkbeck College, University of London; Professor Mona Baker (near right), Professor of Translation Studies at the University of Manchester; and representatives from the British Council and the British Ministry of Defence. Panelists on the Provisional Programme hail from institutions in England, of course, but also in Belgium, Canada, Cyprus, Finland, France, Germany, Ireland, Italy, Japan, Macedonia, Slovenia, Spain, the United States, and Wales. 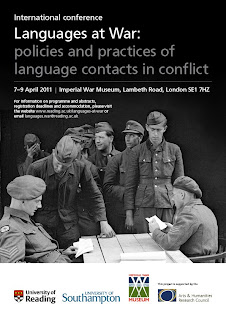