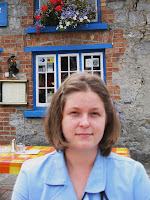 It is IntLawGrrls' great pleasure to welcome Mariah McGill (pictured right) as today's guest blogger.
Mariah is the Ford Foundation Fellow with the Program on Human Rights and the Global Economy at Northeastern University School of Law. She graduated from Northeastern University School of Law in May 2009. Mariah has held legal internships at the Massachusetts Department of Early Education and Care, the American Civil Liberties Union of Massachusetts and the United States District Court for the District of Vermont.
Over the course of her fellowship, Mariah has been involved in a variety of projects to further the implementation of economic, social and cultural rights in the United States. She served as Institute Coordinator for the two-day Institute held at Northeastern University School of Law on October 14 and 15, 2010, entitled “Beyond National Security: Immigrant Communities and Economic, Social and Cultural Rights.” The Institute brought together lawyers, activists and scholars to discuss the treatment of noncitizens in the United States and resulted in the drafting of the “Boston Principles on Economic, Social and Cultural Rights of Noncitizens.”
Mariah has also been documenting Vermont’s healthcare reform efforts. She published an article in Clearinghouse Review entitled “Using Human Rights to Move Beyond the Politically Possible,”

which explains the role the Vermont Workers’ Center has played in advancing a human right to healthcare in the State of Vermont. Mariah's guest post below discusses the incorporation of human rights principles into universal healthcare legislation passed in Vermont in May 2010.
Mariah dedicates her post to Sojourner Truth (left), the former slave, preacher, abolitionist and women's rights activist (prior IntLawGrrls posts) of whom Mariah says:

I've always found her "Ain't I a Woman" speech delivered at the 1851 Akron Women's Rights Convention to be particularly inspiring.

Today we are honored to include Sojourner Truth in our list of foremothers just below the "visiting from..." map at right.

Heartfelt welcome!
by Jaya Ramji-Nogales at 6:16 AM