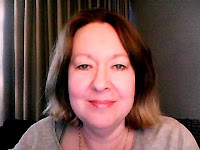 It is IntLawGrrls great pleasure to welcome Dr. Sue Westwood (pictured left) as today's guest blogger. Sue is currently a PhD candidate at the School of Law, Keele University, England, where she also teaches tort law to undergraduates. She has a prior career in health and social care provision, with associated academic and professional qualifications, and has recently re-trained in both gerontology and law. Sue is also a freelance equality and diversity researcher and trainer, specialising in the needs and rights of older people with minority identities.
Sue’s doctoral thesis is on aging lesbian, gay and bisexual identities and experiences of harassment in housing, health and social care provision for older people, within the context of new UK anti-discrimination legislation which has specific exclusions from protection from harassment on the grounds of sexual orientation. Sue's guest post below discusses the very well-received talk she gave at the Aging As A Feminist Concern conference last month at Emory Law School, about which IntLawGrrl Naomi Cahn posted here.
Sue has selected Emmeline Pankhurst (pictured below right) as her transnational foremother. Born in 1858, Pankhurst was the leader of the UK suffrage movement. (Prior IntLawGrrls posts.) After initially pursuing political lobbying to get women the vote without success, she later advocated more militant activism, particularly after her husband died. Her militant attitude caused a split with other women activists, including her daughters, and Emmeline went on to form the Women’s Social and Political Union (WSPU).
The suffragists in the WSPU chained themselves to railings, smashed 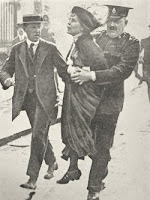 windows and committed acts of arson to call attention to their campaign for women to be given the vote. Many, including Emmeline herself, were imprisoned, and then went on hunger strike. The women were subjected to brutal force-feeding on a routine basis, and Emmeline said she would never forget the sound of the women’s screams from her times in prison. Many of the women, including Emmeline, had long-term health problems associated with both the self-starvation and forced-feeding.
Emmeline was a controversial figure. She became involved in Conservative politics in later life, saying her life experiences had caused her to revise her political stance, although she always remained deeply committed to equality between men and women. In 1918 some women over 30 were given the vote in the UK, but it was not until 1928, the same year that Emmeline died, that all women were given the same right to vote as men in the UK. In Sue's words:

Emmeline was a major driving force in women first getting the vote in the UK.

Today Pankhurst joins other IntLawGrrls foremothers in the list at right just below our "visiting from..." map.
Heartfelt welcome!