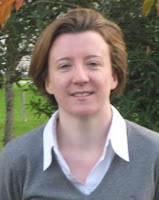 It's IntLawGrrls' great pleasure to welcome as today's guest bloggers Christine Bell (left) and Dr. Catherine O'Rourke (right), colleagues at the Transitional Justice Institute, University of Ulster, Northern Ireland.
► Christine serves as an Associate Director of the Institute (along with IntLawGrrls alumna Fionnuala Ní Aoláin), and also is a Professor of Public International Law at the university's Magee campus in Derry. She's the previous Director of the Centre for International and Comparative Human Rights Law at Queen's University in Belfast, her hometown. After reading law at Selwyn College, Cambridge, England, Christine earned an LL.M from Harvard Law School, supported by a Harkness Fellowship. Both a barrister and an attorney, she practiced for a period at Debevoise & Plimpton in New York. She's served as chairperson of Belfast-based Committee on the Administration of Justice, as a founding member of the Northern Ireland Human Rights Commission, and as a member of the European Commission’s Committee of Experts on Fundamental Rights. She has taken part in various peace negotiations discussions, and given advice and training to diplomats, mediators, and lawyers.
In 2007, Christine was a Fernand Braudel Senior Fellow at the European University Institute, Florence, Italy. Her 2006 article "Peace Agreements: Their Nature and Legal Status" won the Francis Deák Prize, awarded annually "to a younger author for meritorious scholarship

published in The American Journal of International Law." Among her other publications are 2 books: On the Law of Peace: Peace Agreements and the Lex Pacificatoria (2008) and Peace Agreements and Human Rights (2000).
► Catherine is a Lecturer in Human Rights and International Law at the University of Ulster and Gender Research Coordinator at its Transitional Justice Institute. She earned her LLB (Law and Politics) from Queen's University Belfast, her MSc Gender and Development from the Gender Institute at the London School of Economics, and her PhD from the University of Ulster. This past November, the Politics Studies Association of Ireland gave Catherine the Basil Chubb Prize, recognizing the year's best PhD thesis undertaken in Ireland in any field of politics, for her dissertation, "The Law and Politics of Gender in Transition: A Feminist Exploration of Transitional Justice in Chile, Northern Ireland and Colombia" (supervised by Christine and by Dr. Carmel Roulston, Senior Lecturer in Politics at the University of Ulster). Catherine's other publications are here.
A Visiting Scholar in 2007-08 at American University School of International Service in Washington, D.C., Catherine also has been a Visiting Researcher at the law schools of Universidad Diego Portales in Santiago, Chile, and Universidad de los Andes in Bogotá, Colombia. She's been active in Amnesty International's Stop Violence Against Women campaign, provided guidance to the Northern Ireland women's sector on the Bill of Rights drafting process, and participated as a gender and security sector reform expert at the New York-based International Center for Transitional Justice.
In their guest post below, Christine and Catherine discuss the contents and analyze the findings of their empirical research into what impact, if any, U.N. Security Resolution 1325 (2000) on Women and Peace and Security may have had on negotiation and drafting of peace agreements.
Christine and Catherine dedicate their post to Marjorie "Mo" Mowlam (below left), who died from a brain tumor in 2005, at age 55. Mowlam, Christine and Catherine write, was 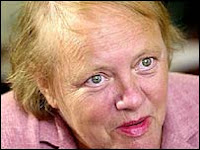 Ireland during the peace negotiations and production of the Belfast/Good Friday Agreement. She was one of the first women negotiators of a peace process, brought a different style to the process, and as we now know, did so while fighting cancer of the brain. Whether one agrees with her role as British Secretary of State, she was a powerful, innovative and feminist woman whose remarkable ways of communication played a key role in achieving a peace settlement. All sides would acknowledge her impact. She suffered political marginalization as a women due to her success and had she lived would undoubtedly be one of the woman who could have played a key mediation role in other conflicts.

Today Mowlam joins IntLawGrrls' other foremothers in the list just below our "visiting from..." map at right.