In Defense of Human Rights Defenders 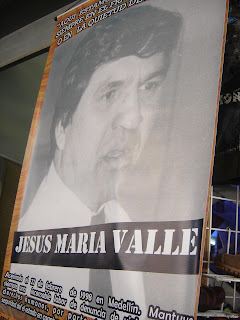 On this day in 1998, paramilitaries stormed into the office of Jesús María Valle Jaramillo (left), a Colombian lawyer and human rights defender who had been active in denouncing crimes committed by paramilitaries in conjunction with members of the Colombian army. Valle Jaramillo was executed. With him on this day 13 years ago were his sister Nelly Valle Jaramillo and a friend, Carlos Fernando Jaramillo Correa. These two individuals were tied, dragged across the office, and threatened with death.
The victims brought a case against Colombia before the Inter-American human rights system (the Commission and the Court). Remarkably, before the Commission, the state partially admitted its responsibility by omission, apologized, and offered reparations. The victims, however, argued that the terms of the admission denied the State's responsibility for its agents as co-authors, accomplices, or instigators in the alleged violations and thus did not fully contribute to the victims' desires for truth and justice. Accordingly, they pressed the Commission to forward the case to the Court.
Before the Court, Colombia was found responsible by omission for violations of the victims' rights to
Drawing on the conclusions of its prior cases involving Colombia, the Court noted that the state originally encouraged the creation of “self defense” paramilitary groups, but that these groups began to "function beyond the law" and commit human rights abuses. The Court also noted that prior cases demonstrated numerous links between paramilitary groups and members of the armed forces such that the Colombian state bore direct international responsibility for the failure to comply with “its obligation to ensure human rights, [and, thus,] its duty of prevention and protection.” In addition, the Court found that

even though the State has adopted certain legislative measures to prohibit, prevent and sanction the activities of the “self defense” or paramilitary groups, these measures did not translate into the effective deactivation of the danger that the State helped create. [T]his accentuates the State’s special obligations of prevention and protection...

In addition, the Court made note of the special guarantees owed to human rights advocates in light of their work defending and promoting human rights. The Court acknowledged that Colombia had already implemented a series of measures to assist and protect human rights defenders including

Nonetheless, full compliance with the obligation that states create the necessary conditions for the effective enjoyment and exercise of the rights established in the Convention,

is tied intrinsically to the protection and recognition of the importance of the role of human rights defenders, whose work is essential to strengthen democracy and the rule of law.

Thus, where a state is aware of a real and immediate danger to human rights defenders, a State

has the obligation to adopt all reasonable measures required to guarantee the rights to life, to personal liberty, and to personal integrity of those defenders who denounce human rights violations and who are in a situation of special vulnerability such as the internal armed conflict in Colombia.

With respect to reparations, the Court also undertook an interesting discussion of which family members should be recognized as "next of kin", reflecting the civil law's more expansive notions of dependents/beneficiaries.

There is also important information on the site of Margaret Sekaggya, the OHCHR's Special Rapporteur for Human Rights Defenders:
http://www2.ohchr.org/english/issues/defenders/