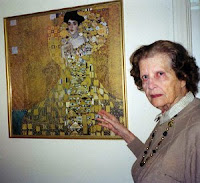 Maria Altmann (right), who won her Supreme Court case seeking recovery of art stolen from her family during the Nazi era, died Monday at her home.
She'd been born Maria Viktoria Bloch-Bauer 94 years earlier, the youngest child in a wealthy Viennese family. The family included her maternal aunt Adele, who sat for the 1907 portrait at right, by Gustav Klimt. (credit for 2006 photo by Tom Tugend)
Having fled Nazi-occupied Vienna as a newlywed, Altmann did not learn of the whereabouts of this and other items in her family's art collection until 1999. By then she was an 82-year-old widowed grandmother living in Los Angeles County.
She filed a claim that went all the way to the U.S. Supreme Court. In Republic of Austria v. Altmann (2004), Justices ruled 8-1 in her favor and, as described in a post by IntLawGrrls guest/alumna Jennifer Kreder, the portrait and other paintings were returned to her.
by Diane Marie Amann at 1:30 AM