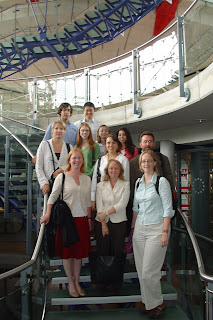 Recently, I had occasion to re-read the momentous case of Opuz v. Turkey before the European Court of Human Rights (a case we've discussed on a number of occasions). (The photo at left shows some students and I visiting the Court several years ago). In Opuz, the Court ruled that Turkey’s failure to respond to twelve years of domestic violence against a woman and her mother (who was ultimately killed by the perpetrator) amounted to a violation of the right to life (set forth in Article 2 of the Convention for the Protection of Human Rights and Fundamental Freedoms); a violation of the right to be free from torture and ill-treatment (Article 3); and a violation of the right to non-discrimination on the basis of sex (Article 14).
In so ruling, the Court determined that laws on Turkey's books addressed to protecting victims of intimate violence were not fully implemented:

Acknowledging that it cannot place an "unreasonable or disproportionate" burden on the State vis-a-vis the State's positive obligations to prevent violations, the Court held nonetheless that the State's duty to intervene is triggered as soon as the State's agents know (or should know) that there is a real and immediate threat to an individual. (Para. 129). In light of the escalating violence against the applicant and her mother, the Court held that the responsibility for the effective prevention and prosecution of acts of intimate violence fell squarely on the State. 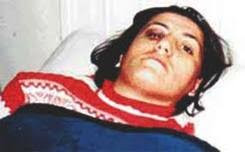 One aspect of the case on which we've not heretofore focused involves the fact that several times over the period in question, the applicant (at left, photo credit) and her mother filed, but then withdrew, criminal petitions against the abusive husband. The Court thus had to consider whether the authorities were nonetheless obliged under the circumstances to pursue the criminal proceedings against the husband.

The Court noted that a number of states require the authorities to continue criminal proceedings even when the victim withdraws a complaint in cases of domestic violence. In other states, the authorities may continue such proceedings in the public interest in light of several factors, including:
Some states make the further distinction between crimes that are privately prosecutable and require the victim's complaint, and other--usually more serious--offenses that are prosecutable in the public interest in the absence of the victim's complaint and even without the victim's support. (See paras. 87-89).
In Turkey, it is only where the crime in question resulted in unfitness to work for ten days or more that the authorities were required to pursue criminal proceedings even absent a complaint lodged by the victim. (Para. 123). Indeed, Turkey argued that it would have violated the applicant's right to privacy and family life, set forth in Article 8 of the Convention, were the police to have separated the husband from the family.

The Court noted that a balance must be struck between the right of every person to be protected from intimate violence and the parallel rights to privacy and the family. (Para. 138). Here, the Court determined that Turkey had not struck the right balance in light of the factors listed above. Rather, the Turkish legislative framework set too high a bar to allow a prosecution to go forward absent a complaint from the victim. In addition, the authorities, although not entirely passive, failed to display the necessary due diligence to protect the rights at issue in light of those protective measures that were available to them and the severity of the harm. Bearing in mind the many reasons a victim might withdraw her complaint (including threats, "false consciousness," an apparent reconciliation, and a faith in the perpetrator's willingness and ability to reform), the rights to privacy and the family cannot be applied in such a way that they effectively override those rights addressed to the very safety of the private realm in the first place.

Interights intervened in the case (their case file is here) and provided an excellent brief on the emerging due diligence standard in human rights law. The brief traces trends in domestic law away from requiring victim participation in such cases towards placing authority for effective prosecution on the State. In addition, the brief noted that other persons and entities (such as medical personnel, family members, and neighbors) can increasingly report cases of domestic violence.
The petitioner, Nahilde Opuz, is reportedly in hiding, concerned that her ex-husband will retaliate against her for pursuing her case.
by Beth Van Schaack at 6:14 AM