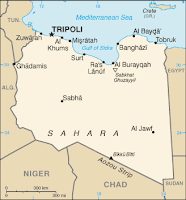 As the unrest in Libya has intensified over the past week, so have the flows of foreigners out of the country. Those lucky enough to come from wealthy nations have been evacuated in droves, while poorer migrant workers have had to fend for themselves. Many of these workers have been targeted by Qaddafi's regime simply for being foreigners, making their already precarious situation even more dangerous. While most have fled by foot to Tunisia and Egypt, the spectre of migrant flows to Europe has placed increasing pressure on the common European migration system.
The International Organization for Migration estimates that there were as many as 1.5 million foreigners in Libya when the crisis began; several thousand were US citizens, most working in the energy industry. Unable to evacuate many of its citizens through the airport, the US government has also sent a ferry but its departure has been delayed by stormy seas. Turkey, which has mounted its most extensive evacuation effort to date, has so far brought 5,000 people to Turkey and continues to ferry its citizens out of Libya. The Italians, the Chinese, and the Jordanians have sent ships or planes to evacuate their nationals.
Just as Libya's booming construction industry and rich oil fields drew these foreigners to the country, it also drew poorer migrant workers, who have not received assistance from their governments. Even worse, many of these foreigners have been specifically targeted by Libyan government forces, as Qaddafi has blamed Egyptians and Tunisians for causing the violence. Those fleeing report seeing dozens of their co-nationals killed and others subject to violent attacks including rape and torture, yet complain that their governments have not stepped in to protect them. Sub-Saharan Africans living in Libya have been similarly targeted because Qaddafi's forces think they are mercenaries. A UNHCR spokeswoman stated that it's dangerous "just having a black face" in Libya right now.
Over 30,000 of these poorer migrants have fled on foot to Tunisia and Egypt. This flow has been comprised largely of Egyptians and Tunisians, though Chinese and others have also escaped. Of greater concern are the tens of thousands of South Asians and Sub-Saharan Africans working in Libya, only a handful of whom have made it out of the country. The most desperate have taken the 1,000 mile trek across the desert to Niger. The UNHCR has emphasized the importance of open borders as crucial to protection of not only the 8,000 recognized refugees in Libya but also those fleeing the violence. While Egypt and Tunisia have so far been amenable to such requests, Europe is a different story.
The Italians continue to scaremonger, claiming that as many as 300,000 to 1.5 million migrant workers in Libya could end up in Europe even though most have fled to Egypt and Tunisia. Other EU leaders from nations such as Austria, Belgium, and Germany (whose borders are unlikely to be faced with such influxes) have remained skeptical that such flows will materialize and unwilling to take steps to assist Italy in advance (apart from a FRONTEX mission to help with screening and funding for Italian boat patrols in the Mediterranean). The general consensus among northern European states seems to be that Italy can handle the 5,000 migrants they've received so far. Italy's response? Northern League leader Umberto Bossi said that if migrants arrive, they'll take matters into their own hands by sending them into other EU nations through the Schengen border-free system.
The southern European states with Mediterranean borders, including Cyprus, France, Malta, and Spain, joined Italy yesterday in requesting EU funds to assist with the influx and burden-sharing on the part of other EU countries; those discussions continued into the night yesterday. One can only hope that they will discontinue the "push-back" policies for those fleeing the violence in Libya and other North African states, and offer a genuine protection process for refugees and other vulnerable migrants.