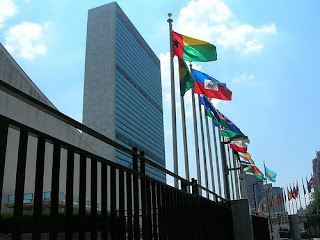 So concludes a San Francisco Chronicle commentary urging that a woman be appointed Secretary-General of the United Nations at the end of Ban Ki-moon's 1st term in January 2012. (credit for (c) Francesco Federico photo of U.N. plaza)
Only 3 words are devoted to the possibility that Ban, formerly a diplomat in South Korea, might be reappointed. The rest of the full-page essay sets out reasons why "It's time for a Madame Secretary," to quote the title as it appeared in the print edition. (As Stephanie's post above explains, the issue's arisen before.)
The authors -- Dr. Michael E. Brown, Dean of the Elliott School of International Affairs at George Washington University, and Dr. Chantal de Jonge Oudrant, Associate Vice Presidentof the Jennings Randolph Fellowship Program, U.S. Institute of Peace -- then suggest several "brilliant female leaders" whom they deem to possess the requisite "policy expertise, political experience and gravitas."
And their nominees are:
► U.N. Under-Secretary Michelle Bachelet (prior posts), who now serves as the 1st head of UN Women, having completed service as President of Chile, the 1st woman so to lead her country. (More UN Women news in the post below.)
► Helen Clark (prior posts), Administrator of the U.N. Development Programme (1st woman to lead that agency) and former Prime Minister of New Zealand (1st woman to win that office following an election).
► Radhika Coomaraswamy (prior posts), U.N. Special Representative for Children and Armed Conflict and former chair of the Sri Lanka Human rights Commission.
► Graça Machel (prior posts), who has served as a U.N. expert on child soldiers, is a women's and children's rights advocate, and who was Minister of Education and Culture in Mozambique.
► Margot Wallström (prior posts), U.N. Special Representative on Sexual Violence in Conflict and formerly holder of ministerial posts both in her native Sweden and in European institutions.
An impressive list.
Glaring omission: absence of any mention of the 3 women who've served as U.N. High Commissioner for Human Rights.
Other nominations welcome.