'How many women are there?'

The question, heard on my commuter train yesterday, spoke volumes.
The question referred to this week's anti-government 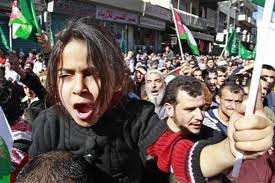 protests in Egypt. But it applied to all the ferment throughout North Africa and the Middle East this young but remarkable new year.
Mass demonstrations in Egypt, which yesterday prompted 30-plus-year-President Hosni Mubarak to attempt an LBJ.

Mass demonstrations as well, as IntLawGrrl Karima Bennoune has posted, in Algeria and Tunisia. Still more in Yemen and Sudan. Plans are on for Syria this weekend.
Then too there was yesterday's trying-to-get-in-front-of-events dismissal of the Cabinet of Jordan, another site of demonstrations, by its king. 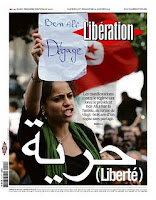 The gender dynamics in countries like these are fraught. For that reason, a marker of the true democratic potential of these events is inherent in the commuter's question quoted above. Rephrased, it is:

Are women taking part, and if so, to what extent?

As to the 1st part of the question, it seems the answer is "yes."
Although most photos shows seas of men, within can be found islands of women. Women, young and old, with and without head coverings. (In

addition to photos accompanying this post, see, e.g., here and here.) Other women reporting on the scene, via all the channels of social networking about which Hope Lewis posted earlier this week. (Some are local women. Some -- like Sonia Verma, tweeting for Toronto's Globe and 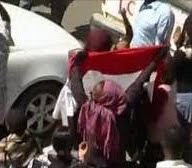 Mail (far right), and Harriet Sherwood, tweeting for London's Guardian (near right) -- are not.)
As to the 2d part of the question?

How extensive is women's participation, now and for the long term?

Hi, I am in Cairo and came to research on the role of women in this movement. Well they were very involved from the beginning. Coming from very different social and religious background. They participated in the organization of the demonstrations, volunteered to serach the female at the checkpoints going to Tahrir, had posters and were screaming slogans. But since yesterday afternoon, I don't see any of them from where I am. I guess with the violence erupting they left or were told so. Give me an email if you want more details or pictures.

Hi, Julie, thanks for this info. Can you send your e-address to intlawgrrls@gmail.com?