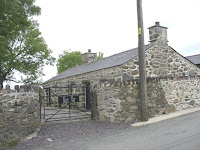 On this day in ...
... 1891 (120 years ago today), Kate Roberts (below left) was born, the daughter of a stone quarry worker, in Rhosgadfan, Caernarfon, Gwynedd, Wales. (It's now the site of the Heritage Centre at right, named after her (photo credit).) Initially a schoolteacher, Roberts became a journalist, editor, owner-operator of a publishing house, member of the Welsh Nationalist Party, and "the most distinguished Welsh author of the 20th century." Roberts is best known for her short stories and novels. (Some of her works are available in English). Examples are Te yn y grug ("Tea in the heather"), a 1959 collection of short stories about "a young girl's emotions as

she grows up in the Welsh countryside, and Traed mewn cyffion ("Feet in chains"), "a much darker" 1936 novel about a woman experiencing "the hardships of her life as she struggles to bring up six children" in a quarrying community like that in which Roberts was born. Roberts died in 1985.