On this day in ...
... 2008, "in an extraordinary meeting" held on a Sunday in Pristina, the Kosovo Declaration of Independence. Pivotal paragraphs:

1. We, the democratically-elected leaders of our people, hereby declare Kosovo to be an independent and sovereign state. This declaration reflects the will 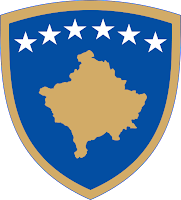 of our people and it is in full accordance with the recommendations of UN Special Envoy Martti Ahtisaari and his Comprehensive Proposal for the Kosovo Status Settlement.
2. We declare Kosovo to be a democratic, secular and multi-ethnic republic, guided by the principles of non-discrimination and equal protection under the law. We shall protect and promote the rights of all communities in Kosovo and create the conditions necessary for their effective participation in political and decision-making processes.

(credit for image of Kosovo coat of arms) As readers of IntLawGrrls' Kosovo posts know, last summer, an Advisory Opinion of the International Court of Justice deemed the unilateral proclamation of independence from Serbia to be in accordance with international law. There seems to have been little movement toward fully realized statehood; U.N. membership, for example. This may be due in part to various scandals swirling about Kosovo's leadership -- a situation that led a BBC commentator recently to describe Kosovo's uncertain status as "unfinished business which has implications that range far wider than this small territory in the former Yugoslavia."