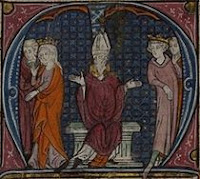 On this day in ...
... 1162, during the time of the Crusades, one Amaury 1er (Amalric the First), born into a family with roots in France, was crowned King of Jerusalem. He was permitted to ascend to the throne on the death of his brother, on one condition: that he repudiate his wife, Agnès de Courtenay, whom barons deemed a frivolous schemer, "unworthy" to become "queen of a city as important as Jerusalem." (Their complaints bear echo to some of those levied recently against 1st ladies in Tunisia and Jordan (here and here).) Agnès would marry 4 times. After the death of her royal ex-husband and enthronement of their son, Agnès would return to court -- and to court intrigues. (credit for depiction of the 1162 "annulment" of Agnès and Amaury following a marriage that had produced 2 children)