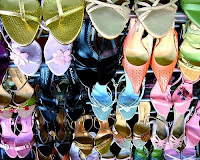 On this day in ...
... 1986 (25 years ago today), what soon would come to be called the "People Power" movement began in the Philippines. (It's an anniversary with special resonance this year of "North African People Power.") Precipitating events was a Presidential election after which longtime dictator Ferdinand Marcos (prior posts) refused to step down despite contentions that his opponent, Corazon Aquino, had won. On this day couple "senior members" of his government called for Marcos to step down. Soon "hundreds of thousands of civilians responded to calls for an uprising" -- one that would force the autocrat and his wife, Imelda Marcos, to flee (leaving behind her 2,700 pairs of shoes). (photo credit) He died in Hawaii in 1989; Aquino in Manila in 2009. Imelda Marcos opened a museum filled with her shoes in 2001; she remains mired in corruption lawsuits to this day.