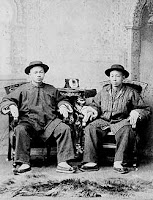 On this day in ...
... 1887, in British Columbia, Canada, Vancouver lost its city charter for having failed to quell rioting against immigrants. The day before, an anti-Chinese meeting provoked hundreds of people to march -- notwithstanding snowy weather -- to an encampment, raze it, and drive out its inhabitants in an anti-Chinese riot. "The Chinese didn’t return to Vancouver until the Attorney General in Victoria introduced An Act for the Preservation of Peace within the Municipal Limits of the City of Vancouver and brought 36 constables from Victoria to Vancouver." (credit for 1892 Vancouver Public Library photo captioned "Immigrants Mah Shou Hing and Lee Dye," pictured alongside this account of the 1887 riot)