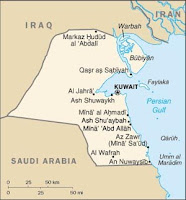 On this day in ...
... 1991 (20 years ago today), in a televised address, U.S. President George H.W. Bush declared Kuwait liberated, Iraq defeated, and U.S.-led allies on stand-down status. He called upon Iraqi President Saddam Hussein, whose forces The New York Times described as "isolated and battered," to begin negotiating a permanent ceasefire. (map credit) The declaration marked the end of the Persian Gulf War -- but not, as readers of our "...and counting..." feature well know, the end of all combat in Iraq.