On this day in ...
... 2006, the International Court of Justice issued a judgment concluding by a vote of 15 to 2 that it had no jurisdiction to consider an application that the Democratic Republic of Congo had lodged 4 years earlier, in which it alleged that Rwanda, one of its neighbors to the east (map credit), had committed 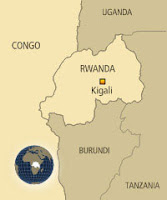 The ICJ's judgment in Armed Activities on the Territory of the Congo (New Application : 2002) (Democratic Republic of the Congo v. Rwanda), the court declined to exercise jurisdiction based on a laundry list of treaties. It held inapplicable, for instance: the 1984 Convention Against Torture, for the reason that Rwanda was not a state party; and the 1948 Convention Against Genocide, for the reason that Rwanda had attached a pertinent reservation to its ratification of the latter treaty. Nor did it agree with the DRC that Rwanda had waived its right to object to jurisdiction.